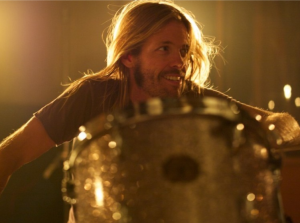 Taylor Hawkins is the foremost American drummer currently headlining the international stadium, arena and festival circuit. Since joining Foo Fighters in 1997 for the tour in support of the band’s sophomore album The Colour & The Shape, Hawkins’ uniquely rock solid yet flamboyant style has anchored such albums from the 25-million-plus-selling 11-Grammy winning catalogue as There Is Nothing Left To Lose (1999), One By One (2002), In Your Honor (2005), Echoes Silence Patience & Grace (2007) and Wasting Light (2011). Foo Fighters’ most recent album, the gold-certified Sonic Highways, shared its title with the band’s Emmy-winning HBO documentary series, and was supported by Foo Fighters 20th anniversary world tour—the band’s biggest to date, selling out the likes of New York’s Citi Field, Washington DC’s RFK Stadium, Boston’s Fenway Park, Chicago’s Wrigley Field and ultimately winding down as the #5 grossing tour worldwide of 2015.

Born in Fort Worth, Texas, Hawkins moved with his family at an early age to Laguna Beach, California, where he quickly moving up the ranks of the local circuit, eventually landing an international touring gig with Sass Jordan which in turn led to his becoming drummer for Alanis Morissette. It was during the 1995-1996 world tour in support of Alanis’ massively successful Jagged Little Pill that Hawkins first crossed paths with his future brother from another mother, Dave Grohl and fellow Foos Nate Mendel and Pat Smear. When a vacancy opened up on the Foo Fighters drum stool, Hawkins was a natural fit and instantly became an integral part of the FF sound. Hawkins made his recorded debut with Foo Fighters on 1999’s There Is Nothing Left To Lose, the band’s third album and first of four FF albums to win the Grammy for Best Rock Album—the others being One By One (2002), Echoes Silence Patience & Grace (2007) and Wasting Light (2011).  All told, Foo Fighters’ recordings featuring Hawkins have won 11 Grammys. Hawkins has also contributed lead vocals to Foo Fighters recordings on occasion, the first being a cover of Pink Floyd’s “Have A Cigar” featured as the B-side to the band’s hit “Learn To Fly,” and the most notable being “Cold Day In The Sun,” a highlight from 2005’s In Your Honor that remains a staple of the FF live set to this day.

While Foo Fighters’ hard driving recording and touring regimen would be more than enough for most musicians, Hawkins’ all consuming passion for creating and playing music requires multiple outlets: He has released albums with as Taylor Hawkins & The Coattail Riders in 2006 and 2010, and a self-titled debut album from more recent side project The Birds Of Satan in 2014. Among the artists with whom Hawkins has shared stage and studio are Roger Taylor and Brian May of Queen, Geddy Lee and Alex Lifeson of Rush, Slash of Guns N’ Roses, Vasco Rossi, Bob Mould and Jane’s Addiction co-founder Eric Avery. And when he’s not playing with any/all of the above or at home being a flying husband and father, Hawkins can be found regularly playing in Chevy Metal. Featuring fellow Birds Of Satan Wiley Hodgden and Mick Murphy, Chevy Metal is Hawkins’ longstanding cover band, whose exhaustive and exhausting repertoire spans the best of the Rolling Stones, Van Halen, Queen, Black Sabbath, Wings, Thin Lizzy, Motley Crue, ZZ Top, Aerosmith and so much more.

As a Turnaround Artist, Hawkins will be working with Riverside Central Elementary School in Rochester, MN.