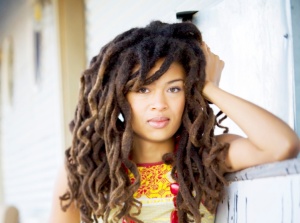 Singer-songwriter and multi-instrumentalist Valerie June got her start singing in church in her hometown of Humboldt, TN. “There was every kind of voice you can think of,” she reflected “so I was always trying to sit beside somebody who had a cool voice and listen to them and see what I liked about it. I had 500 teachers three-days-a-week for 18 years.” Over time, that education translated into an astonishing and deeply nuanced singing style. At age 19, she took on the music scene in Memphis, performing and recording like she’d always dreamed. The determined June taught herself guitar, banjo, and ukulele, which, alongside her voice, made for an immediately distinctive sensibility. She calls it Organic Moonshine Roots Music, a blend of rural roots and country that bridges Alan Lomax’s acoustic field recordings with biting, electric indie-blues. If one foot is in the past, the other is certainly in the future, as she recently found herself writing a song for the latest Mavis Staples album “Livin’ on a High Note”, produced by M. Ward. June’s title track “High Note” is featured alongside songs written by Nick Cave, tUnE-yA-rDs, Justin Vernon, Neko Case and others. After self-releasing her first few recordings, June released 2013’s “Pushin’ Against A Stone” on Concord to critical acclaim. Produced by Kevin Augunas and Dan Auerbach, and featuring Booker T. Jones, the album highlights June’s sound as well as her timeless songwriting. NPR called it “the product of the Tennessee-bred 31-year-old’s singular vision, which she’s constructed around her high, twangy, idiosyncratic voice… a raggedly beautiful showcase for an artist whose bold, shaggy eclecticism makes room for coos, swoons and screams.

As a Turnaround Artist, Ms. June will be working with the Roger Williams Middle School in Providence, RI.

“Creativity is a universal language that brings the world to our doorstep and inspires us to soar whether we are creating or observing. I believe it encourages students to reach beyond their limitations and embrace the endless possibilities of their dreams. I am looking forward to sharing my journey with the Turnaround Arts students.” 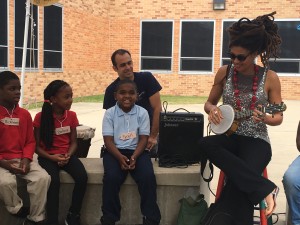 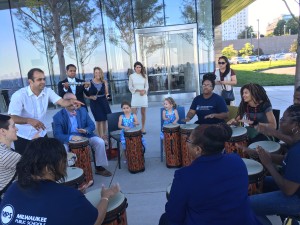