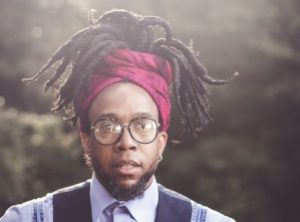 Speech was born Todd Thomas in Milwaukee, Wisconsin. He is the youngest of parents Robert & Patricia Thomas. He grew up on two sides of life: the ghetto of Milwaukee (one of the nation’s roughest cities for African Americans) and Wauwatosa, Milwaukee’s suburbia. Speech learned how to draw from the pains and beauty of both through absorbing the plights of his people and the retreat of middle class blacks to primarily white neighborhoods. At a young age, he dealt with the daily burden of racism, while also experiencing the loss of both his grandmother to a heart attack and his older brother, Terrence Thomas, to an asthma attack within the same week. Through God’s help, he ultimately learned how to recalibrate his inner anger through constructive and dynamic music. To celebrate the lives of those he lost, Speech wrote the song “Tennessee.” In the early 90s, Speech and his mother started the Terrence Thomas Scholarship dedicated to his brother. In 2013, the scholarship is still helping many young black students further their educations.

With this background, Speech started the music group called Arrested Development. The Georgia-based Hip Hop group started from humble and rural beginnings and became a pioneering force in the music world. Arrested Development received two Grammy Awards (Best New Artists & Best Rap Single 1993) for the album, “3 years, 5 months and 2 days in the life of…” Their second album “Zingalamaduni” was met with critical acclaim and nominated for a Grammy. However, all the success and accolades were not enough to prevent a rift in the group that would see them split five years after they formed.

After a much needed break and time to re-group, Speech re-emerged onto the scene and signed a solo record deal with EMI. He spent days and nights in the studio, experimenting with new sounds and styles. Several months later, he released his first single “Like Marvin Gaye Said.” The track went to #1 on the Japanese Tokio 100 charts for 7 weeks straight!

Speech has released five solo albums since 1996, all of which have spawned Top 10 hit singles in Japan. His album “Spiritual People” released in 2000 was certified Gold in Japan and received the Best Black Music Album of the year 2000 by ADLIB magazine. Speech supported each album with sold out tours and intense promotional schedules.

Speech dove into the political realm, touring with Vice President Al Gore and Hillary Clinton during the Clinton reelection campaign, plus tours with Hootie & the Blowfish, Herbie Hancock, Chaka Khan, Youssou N’dour, James Brown, Parliament – Funkadelic, Jason Mraz, and The Roots. He along with Arrested Development also lent their voices to support former President Barack Obama during his campaign).

In 2000, Speech and Arrested Development began performing together again, delighting audiences all over the world with their positive and uplifting brand of Hip Hop. In 2005, he became an ordained minister with the Churches of Christ. Speech says, “My most proud achievement is my marriage to Yolanda, (we’ve been together over 17 years), our two children Jahi and Zoe Thomas and my faith in Jesus, which is my biggest strength & guidance.” He maintains an incredibly busy lifestyle which includes performing with Arrested Development, solo performances, special collaborations, a weekly radio broadcast called “Musical Safari” and writing and producing several music projects per year. He hosts a biweekly industry event in Atlanta called the Mixtape Mixer and organizes a yearly convention called the A&E convention. In addition, Speech and his family own and operate a corn business, a juice business and an African American newspaper in Milwaukee called the Milwaukee Community Journal.