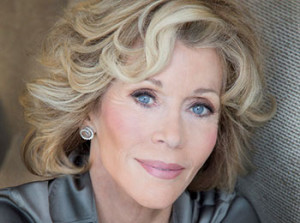 Jane Fonda was born in New York City in 1937, the daughter of Henry Fonda and Frances Seymour Fonda. She attended the Emma Willard School in Troy, New York, and Vassar College. In her early twenties, Fonda studied with renowned acting coach Lee Strasberg and became a member of the Actors Studio in New York. Fonda, is a two-time Academy Award Winner (Best Actress in 1971 for Klute and in 1978 for Coming Home), a three-time Golden Globe winner, and was the 2014 recipient of the AFI Life Achievement Award. Along with starring roles in dozens of highly acclaimed productions, Fonda has also took on responsibilities as a film and television producer. Her credits include Coming Home, The China Syndrome, Nine to Five, Rollover, On Golden Pond, The Morning After, and The Dollmaker. In 2007, Fonda received an Honorary Palme d’Or from the Cannes Film Festival, one of only three people ever to be granted this honor until then. In 2009, she received a Tony Award nomination for her role in the Moises Kaufman’s 33 Variations, on Broadway.

Fonda revolutionized the fitness industry with the release of Jane Fonda’s Workout in 1982. She followed with the production of 23 home exercise videos, 13 aduio recordings and seven bestselling books – selling 17 million copies all together. The original Jane Fonda’s Workout video remains the top growing home video of all time. In 2011, Fonda appeared in Et Si On Vivait Tous Ensemble, a French comedy, followed by Peace, Love & Misunderstanding, co-starring Catherine Keener. She appeared as Nancy Reagan in Lee Daniels’ The Butler in 2013, and with Olivia Wilde and Sam Rockwell in Better Living Through Chemistry. In 2014, she starred in director Shawn Levy’s This is Where I Leave You, with Tina Fey and Jason Bateman. For three seasons, Fonda appeared as media mogul Leona Lansing in an Emmy nominated performance in Aaron Sorkin’s The Newsroom, on HBO. Most recently, she appeared in Youth, written and directed by Paolo Sorrentino and she received a Golden Globe nomination for her performance. Fonda also stars in Netflix’s hit series: Grace and Frankie, which premiered its second season in May 2016.

“I have long known the importance of including arts in education. Not all children learn in the same way and the arts can inspire even the most challenged students to want to learn. I am proud to join the Turnaround Arts Schools family.”