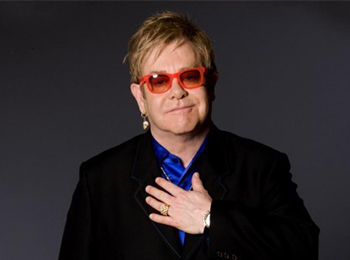 Sir Elton Hercules John, CBE, is one of the most highly acclaimed and successful solo artists of all time. He has achieved 35 gold and 25 platinum albums, has sold more than 250 million records worldwide, and holds the record for the biggest selling single of all time. Over the five decades since his career began in 1969, Sir Elton has played more than 3,500 concerts worldwide. Sir Elton is the third most successful artist in the history of the American charts, behind only Elvis Presley and the Beatles. He has had 56 top 40 singles in the United States, a total second only to Elvis Presley. He achieved seven #1 albums in the three-and-a-half-year period from 1972 to 1975 — a period of concentrated success surpassed only by the Beatles. _

Sir Elton was born on March 25, 1947, in Pinner, Middlesex, England, and given the name Reginald Kenneth Dwight. At the age of three he astonished his family by sitting at the piano and playing The Skater’s Waltz by ear. At the age of 11 he was awarded a scholarship as a Junior Exhibitor at the Royal Academy of Music. _

In 1992 in the US, and in 1993 in the UK, Sir Elton established the Elton John AIDS Foundation, his pioneering charity dedicated to breakthrough work on behalf of those around the world suffering from HIV and related illnesses. Together, the two organizations have raised more than $275 million in support of worthy projects in 55 countries around the world. _

“Since I was a young boy music has been my main focus in life. I am grateful to have had the opportunity to pursue an artistic career from the start. Children all over the world should have the chance to dive in to their creative side and explore the possibilities that can mold their future.”