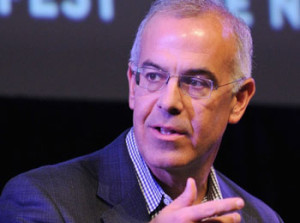 David Brooks became an Op-Ed columnist for The New York Times in September 2003. He is currently a commentator on “The PBS NewsHour,” NPR’s “All Things Considered,” and NBC’s “Meet the Press.” He is the author of “Bobos in Paradise: The New Upper Class and How They Got There,” and “The Social Animal: The Hidden Sources of Love, Character, and Achievement.” In April of 2015 he came out with his fourth book, “The Road to Character,” which was a number 1 New York Times bestseller. My Brooks also teaches at Yale University, and is a member of the American Academy of Arts & Sciences.

As a Turnaround Artist, Mr. Brooks will be working with Dolores T Aaron Academy in New Orleans, LA.

“I’ve been hearing about Turnaround Arts for a while now and I’m incredibly thrilled and honored to be able to take part. Lives can be transformed by art and music, theater and dance, but they can also be transformed by the Humanities: by writing and storytelling, by public speaking and the heroes of history. I can’t wait to watch as students find their voice.”